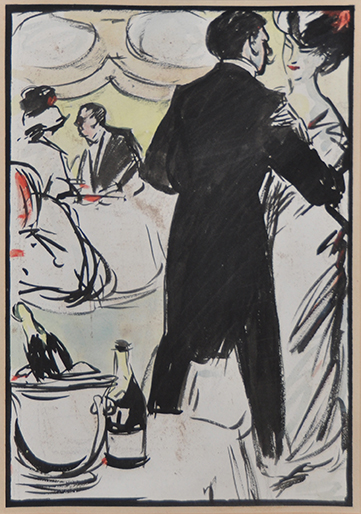 Fergusson had made almost annual visits to France from the mid-1890s and in 1907, using the proceeds of a successful London exhibition, he decided to leave Edinburgh and settle in Paris. There he quickly became a part of the bohemian café society of Montparnasse, mixing with Picasso and Matisse and recruiting models from the many milliners and seamstresses employed nearby.

To earn a living, before he became established in Paris, Fergusson sold drawings such as this to British and American magazines that were keen to capture the atmosphere of the city, its fashionable citizens and their exciting nightlife which was of continuing interest to their readers.

Few of these finished drawings survived the process of being turned into half-tone illustrations and this is one of the best of them, inscribed on the back by Fergusson’s wife Margaret Morris.