Carlo Rossi was born in Johnstone, Renfrewshire, in 1921, and studied at the Glasgow School of Art, graduating in 1943, and in Italy. He was elected a member of the Royal Scottish Society of Painters in Watercolour in 1973 and of the Royal Glasgow Institute of the Fine Arts in 1978. He died in 2010.

Music was a dominant force in his life and subsequently in his art musical instruments often appeared in his paintings. Rossi often compared his work to the music of Bach. His still life works were carefully orchestrated fugues of shape and colours linked together and controlled by the geometry of the line.

Barga, a small town perched on the summit of a peak in the middle of the Tuscan Apennines, became his spiritual home. It has magnificent views. The many paintings of the hill-town are filled with warm colours depicting the red-roofed buildings, luxuriant foliage and represent magically on the canvas the full impact of the atmosphere of an Italian midsummer’s day. Rossi applied the paint with great virtuosity, tempered always with his sensitive and poetic nature.

Whether it is a response to the ever-changing sunlight, revealing myriad colours in the facades and the rippling waters of the Canal Grande and lagoons, his paintings inject the vitality of life-force that is Italy. 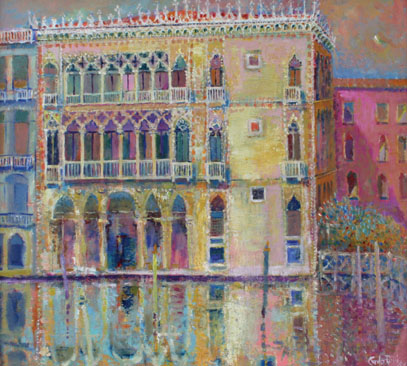 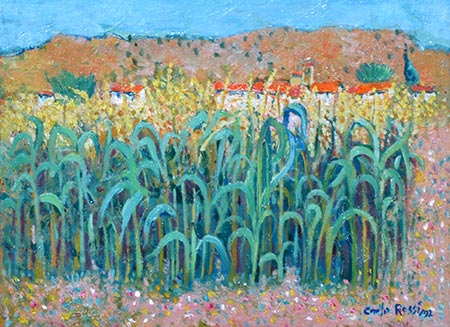