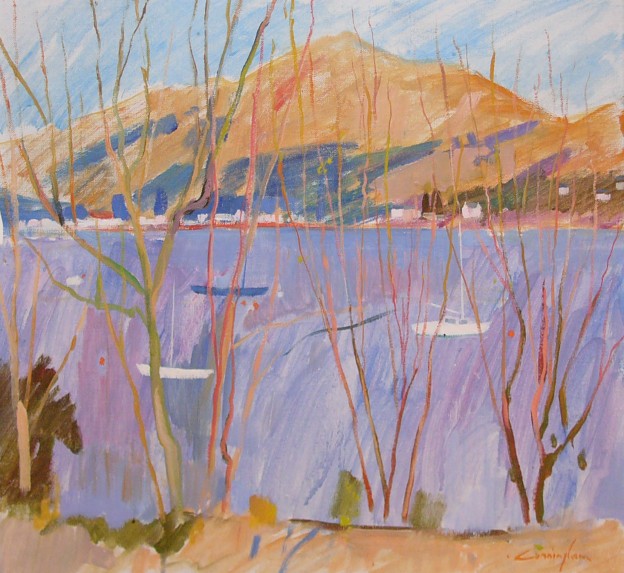 Throughout his painting career he concentrated mainly on the genres of landscape, seascape and still life. He worked over many years internationally, in France, Spain, Italy and Ireland, returning to favoured locations, but the greatest number of his landscapes and seascapes are of the West Coast of Scotland, especially on the Ardnamurchan peninsula, on the most westerly point of mainland Scotland and on the island of Colonsay. The still lifes were painted in his elegant and unique Studio home in Glasgow, at Charing Cross.

John Cunningham exhibited at the Royal Scottish Academy, the Royal Glasgow Institute of the Fine Arts and at many private Galleries in Glasgow, Edinburgh, London and elsewhere. His work is also held in numerous public, corporate and private collections worldwide.

In his lifetime he was a highly acclaimed and respected artist and since his death in 1998 his reputation has continued to grow. Art historians now see him in a direct line of tradition that stretches beyond the exuberant, strong and precisely balanced work of the Scottish Colourists to the immediate engagement with Scotland’s nature, scene and ethos one finds in the world of William McTaggart at the end of the nineteenth century. But nothing about his paintings is nostalgic or retrospective; they are rather instantaneously engaging and enlarging of vision and appetite for Scotland’s characteristic landscapes, seascapes and the poised, attentive qualities of the still lifes – the particular pleasures of linen, furniture, crockery, fruit and wine.