In 1979 he moved to Australia as Head of the Department of Fine Art at the Chisholm Institute in Melbourne. He resigned in 1984 to devote all of his time to painting.

Leon Morrocco, who was elected an Associate of the Royal Scottish Academy in 1971, had eight solo exhibitions in the U.K before moving to Australia where he had a series of highly successful exhibitions in both Melbourne and Sydney.

In 1991, to herald his permanent move back to Britain, Leon held his first British Exhibition for twelve years. His paintings in oil, gouache and pastel, featured landscapes and still lifes from his travels over the last year in Spain, Italy, Matla, Greece, France and Australia. His works reveal both his outstanding draughtsmanship and his passion for colour. In 1998, a monogragh on his life and work, Leon Morrocco: Journeys and Observations’ was published.

His work can be found in many notable public and private collections, including The Scottish National Gallery of Modern Art, H.R.H Princess Margaret, The Scottish Arts Council, Leeds Art Gallery, The Nuffield Foundation, and Queensland Art Gallery. 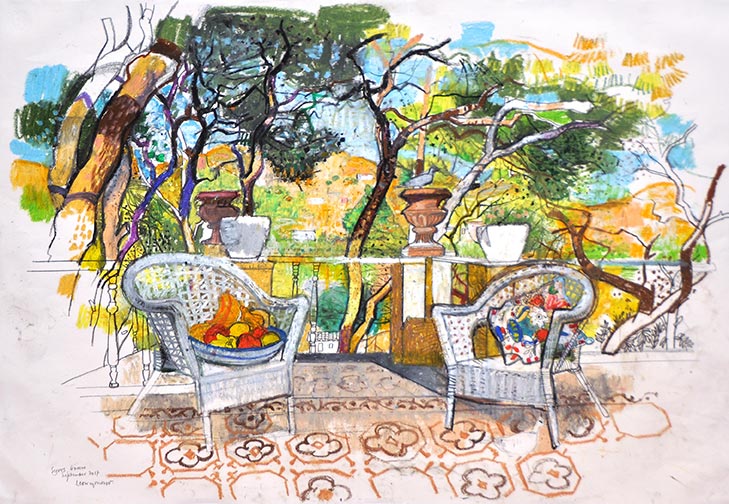 On The Terrace, Syros