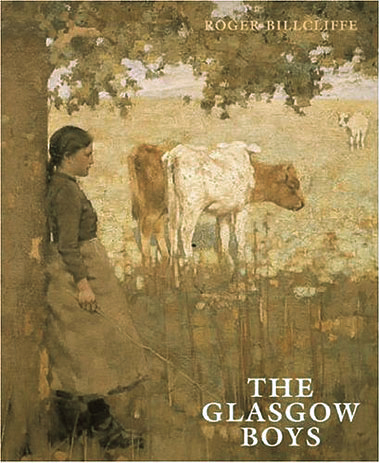 A revised text is now accompanied by over 150 extra colour illustrations (in a total of 285 illustrations), adding both to the understanding of the story of the Glasgow Boys and giving immense pleasure in the continuing use of the book.

Review from The Sunday Times
November 9, 2008

The Glasgow Boys Find Fame Again
It’s time to re-examine the legacy of a key group of Scottish artists as a travelling exhibition of their work is planned.

Back in ’85, a group of Glasgow artists caused a sensation with their first group exhibition. The opening night was the social event of the year, the critics were beside themselves and everyone agreed: these painters were the coming thing.

That would be 1885, and it was James Guthrie, John Lavery, Arthur Melville and E A Hornel’s daring take on perspective, bold use of colour and refusal to stay in their studios painting stags that had the art world in such a lather. Although the Glasgow Boys, as they later became known, knew each other and had been painting together for a few years, it took this show to turn them into a phenomenon.

“They arrived with a bang,” says Roger Billcliffe, the art historian who has single-handedly recorded and protected the group’s reputation. His 1985 book, The Glasgow Boys, has now been expanded and reprinted. “And then, almost as soon as they had arrived, they disappeared again.”

Their reappearance has been slow and patchy, but in 2010, a key exhibition should finally put them up where they belong. Billcliffe’s book has been reissued in a larger format, with lavish colour reproductions, for the run-up to the show, which will start at Kelvingrove Art Gallery in Glasgow before moving to London’s Royal Academy.

This will, says Billcliffe, confirm the Boys’ contribution to late 19th-century painting, the ground they broke and the younger artists they inspired. “It will be a revelation. People will have seen a lot of these pictures in reproduction but not in the flesh. I think it will firmly cement them into the niche they are in.”

It has taken the Scottish establishment longer to recognise the legacy of the Glasgow Boys’ work. Kelvingrove has a strong collection but it could have been stronger.

In 1962 Playmates by Henry came up for auction. The curator of paintings wanted to buy it but had a budget of only £60. A Norwegian dealer outbid him with £62. Earlier this year, the painting reappeared, selling for £400,000.

Besides charming us with images of girls herding ducks and clouds scudding across Ayrshire skies, do the Boys have anything else to contribute to the 21st century? Billcliffe laughs. “You should stick by your guns. There’s no harm in wanting to be successful, but you can see what happens when you sell yourself out. Money can be a powerful factor in taking the sharp edge off your art.”

Link to the article on-line